By Re:Store Justice|2020-08-05T09:02:56-07:00July 31st, 2020|
From KQED, Listen to the entire interview here
Adnan spent the last four of his 16 years of incarceration at San Quentin State Prison. Now he’s an outspoken advocate on behalf of his incarcerated friends still inside. (Courtesy of Adnan Khan)

As of July 17, more than 2,000 people incarcerated at San Quentin State Prison have tested positive for the novel coronavirus and 12 have died, according to the California Department of Corrections and Rehabilitation COVID-19 tracker.

Adnan Khan — who spent the last four years of his prison sentence at San Quentin — has emerged as a vocal advocate for incarcerated people still inside during the outbreak, and for their families. Last year, he was the first person to be released when a new state law challenged the criteria that allowed prosecutors to convict him for a murder he did not commit during the robbery of a marijuana dealer. Khan was sentenced to 25 years to life.

While at San Quentin he founded FirstWatch, a filmmaking project where incarcerated men tell stories about life inside prison. Khan is also the founder and executive director of re:Store Justice, which promotes restorative justice workshops and provides legal help to people who are incarcerated. Khan joined The California Report Magazine host Sasha Khokha from his home in Los Angeles to discuss the COVID-19 outbreak at San Quentin.

This conversation has been edited for brevity and clarity.

On When He Learned About the Outbreak at San Quentin

When the pandemic started back in March, my fears immediately went to the prisons, because the CDC’s guidelines are not applicable to correctional settings. Six foot physical distancing and hand sanitizer — even the ability to wash your hands with soap — is limited in prisons. But somehow, COVID stayed out of San Quentin for about three months. When the botched transfer (of inmates from Chino) happened, that just blew us away.

Editor’s Note: San Quentin had remained COVID-free until 121 inmates were transferred from California Institute for Men in Chino on May 30. The men had not been recently tested for COVID-19 leading up to their transfer to San Quentin. 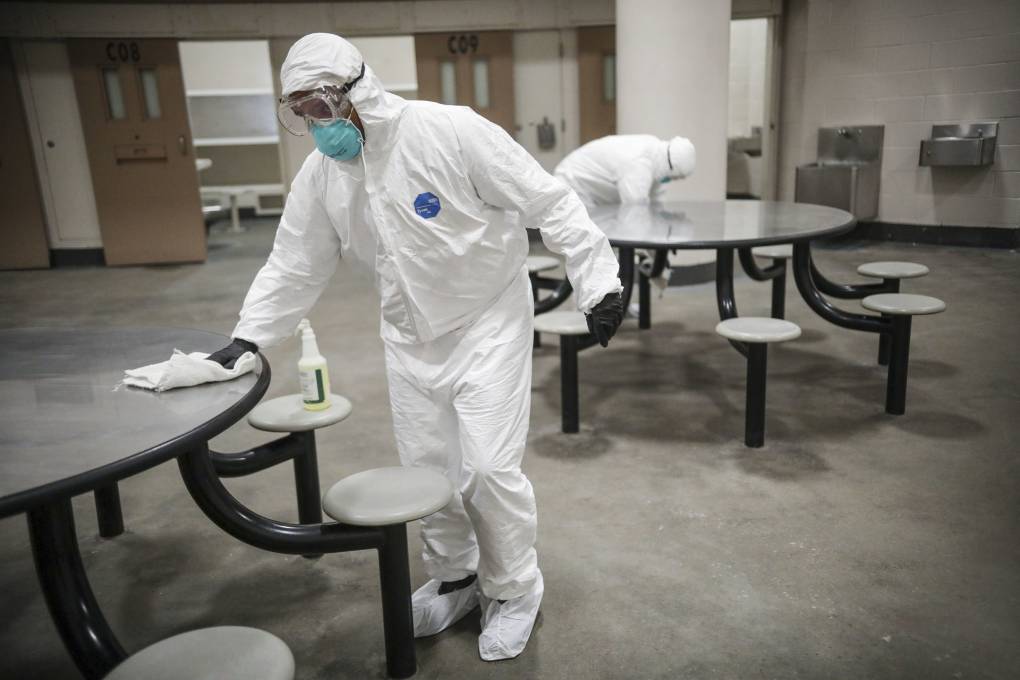 WAYS TO TAKE ACTION
How Can You Help People in Prison Right Now?

On the Vulnerability of Prisoners Inside

First of all, San Quentin is the oldest prison in California. The ventilation is absolutely poor. It is dirty. There’s mold. It is very antiquated. And on top of that, the demographic of people that are incarcerated in San Quentin are elderly or have chronic illnesses. There’s a huge population — including a huge transgender population — that we continue to forget, so there are men and women incarcerated at San Quentin, as well as correctional officers and medical staff and kitchen cooks who all live there. A lot of people feel like, ‘Oh, that’s just prison. Whatever happens inside stays there.’ But by neglecting prisons inside, we infect our society.

On Being Released Before San Quentin’s Outbreak

I do feel helpless and I do feel survivor’s guilt. A lot of us were serving life sentences and we either went to the parole board or were commuted by governors. In my situation, a piece of legislation changed and I was immediately released. I really feel like I escaped death.

Now a year later, there is this deadly virus that’s eating people up. It’s not just about surviving. It’s not just about who dies and who lives. People haven’t seen or heard from their families in four months. It’s devastation that we’re seeing — not just what’s happening inside — but as an extension, what’s happening to their families. And so when people say, ‘We’re on lockdown,’ I understand people’s journeys are completely different. For me, I’m just so happy to do this lockdown from the comfort of my home with a cellphone, a laptop and a Netflix subscription. People in (prison) don’t have anywhere near that. It’s just this feeling of helplessness. How do we help our friends? What power do we have to help? It’s hurtful knowing how limited that power is.

On Advocating for People Still Inside

I have spent hours and hours in self-help groups (at San Quentin) listening to and sharing people’s deepest traumas. I know what that did for the trajectory of their life. I know crimes that people committed and the remorse and they feel towards their crimes. I know what making amends looks like. That’s what really breaks my heart. And that’s what society does not see. We’re talking about people who’ve been through a lot and who continue to suffer. We’re talking about human beings, after all. So when people say, ‘So what? They committed a crime. Do the crime, do the time.’ That’s not a public safety response. I always say I went from an eight-year-old Little League Baseball player to an 18-year-old with a life sentence. None of us are born armed and dangerous. The state should have a higher moral authority than the people it condemns.

When Being an ‘Essential Worker’ Is a Prison Job

I recently received a call from one of my good friends in San Quentin. His name is Anthony Ammons, but I know him better as “Ant.” He is an essential hospital worker getting paid $1 an hour to clean COVID-19 areas. He couldn’t refuse to clean because he would get written up, which would affect his parole board hearing. Ant gave me a call and told me that he wasn’t getting showers after coming back from work. He and his cellmate contracted COVID because of that.

I have not heard back from Ant and I don’t know what’s happening. Is he okay now? Is he in the hospital? Is he on a ventilator? Is he going back to work and cleaning COVID areas again? I just don’t know. I haven’t heard from him.

On How the California Department of Corrections Has Handled COVID-19

It feels like it’s all over the place. I know from living in prison for 16 years that safety and security always eclipses any type of medical decision. I know people who tested positive and were put back in a cell with people who tested negative. After a lot of media pressure, they finally brought tents on the yard. People in dorms were told to sleep in opposite directions because — according to corrections, not medical — being diagonal creates six foot distance. Those are not health solutions. Those are not CDC guidelines.

‘This is not just a San Quentin problem. This is a problem for our entire nation if we’re trying to flatten the curve.’Adnan Khan

Right now we’re only talking about San Quentin, but they haven’t kept it out of the rest of the prison system. CDCR has blatant procedures to continue transferring people, and we know other prisons have been infected by transfers. A lot of people feel like, ‘Oh, that’s just prison. Whatever happens inside happens inside stays there.’ That’s how we infect our society out here by neglecting prisons inside. This is not just a San Quentin problem. This is a problem for our entire nation if we’re trying to flatten the curve.

On Newsom’s Plan to Release 8,000 Incarcerated People by August

August is too far. When you need an urgent response to a pandemic, you do it immediately. If (Gov. Gavin Newsom) were to say that we’re releasing 2,000 people out of San Quentin, that would be a public health response. The only reason we have a COVID problem (inside prisons) is because we have a mass incarceration problem. There are so many people in prison, and prisons are architecturally designed to have the smallest spaces with the highest amount of people. So mass incarceration and COVID-19 go hand-in-hand.

In my very strong opinion, the essence of rehabilitation is love and family reunification. (The prison system) is built to sever ties intentionally and limit the access to love, care and comfort. For mothers who haven’t seen their sons, whose children haven’t seen their fathers or mothers, it is excruciating. And now family members are just wondering, ‘What’s going on?’

What we’re hearing is that people are taken to the hospital, they may have heard from their family a month or two ago when (San Quentin was still) running phones. Now, it’s just a disappearance.

A lot of mothers and family members are (asking me) in emails and texts and DMs, ‘Can you find out if my son or my dad is in the hospital?’ They just don’t know. They’re terrified to receive a phone call that their family member has died.

If there’s any constant happiness in my life, it’s my 11-week-old baby and my wife. But even with that joy and happiness, it’s sad. I don’t know what society he’s going to grow up in. The best I can do is give him what wasn’t given to me, which is consistent support, love and care. But as far as the world that he’s going to grow up in, I can’t control that. I need to find a better balance to provide him the attention that he deserves, as well as attention that the movement and our better world deserves.

Editor’s Note: KQED asked CDCR for a comment on the claims made in Khan’s interview. They offered a comment as to why not all names of those who’ve died have been released: “Health care status of individual inmates is protected by medical privacy laws. Only those who are condemned are made public due to their public interest case status, which requires a press release in the event a condemned inmate passes away in our custody.”

Mass and static incarceration will not be solved unless we address that which we are most afraid to talk about: violent crime, and/or those serving life sentences. Our mission is to change the way society and the justice system respond to violence and harm. From Proximity to policy.